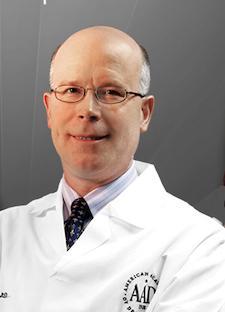 I first moved to Tennessee in August, 1986, to attend the Vanderbilt University School of Medicine after my graduation from Stanford University in California. Following graduation from medical school in 1990, I entered the United States Air Force at Keesler Air Force Base, Mississippi. While at Keesler, I finished a medical internship then trained in aerospace medicine. I served as a flight surgeon for F-15 Eagle Fighter Squadrons at Elmendorf Air Force Base, Alaska, and Eglin Air Force Base, Florida. The Society of United States Air Force Flight Surgeons named me Pacific Air Force Flight Surgeon of the Year in 1994 and Air Combat Command Flight Surgeon of the Year in 1998. In 1999, I left the Air Force to begin dermatology residency training at Vanderbilt University Medical Center. I completed residency and board certification by the American Board of Dermatology in 2002. I practiced at Vanderbilt Dermatology clinics in Franklin and Shelbyville before joining Murfreesboro Dermatology Clinic in 2004. Additionally, I founded Stones River Dermatology 2010.